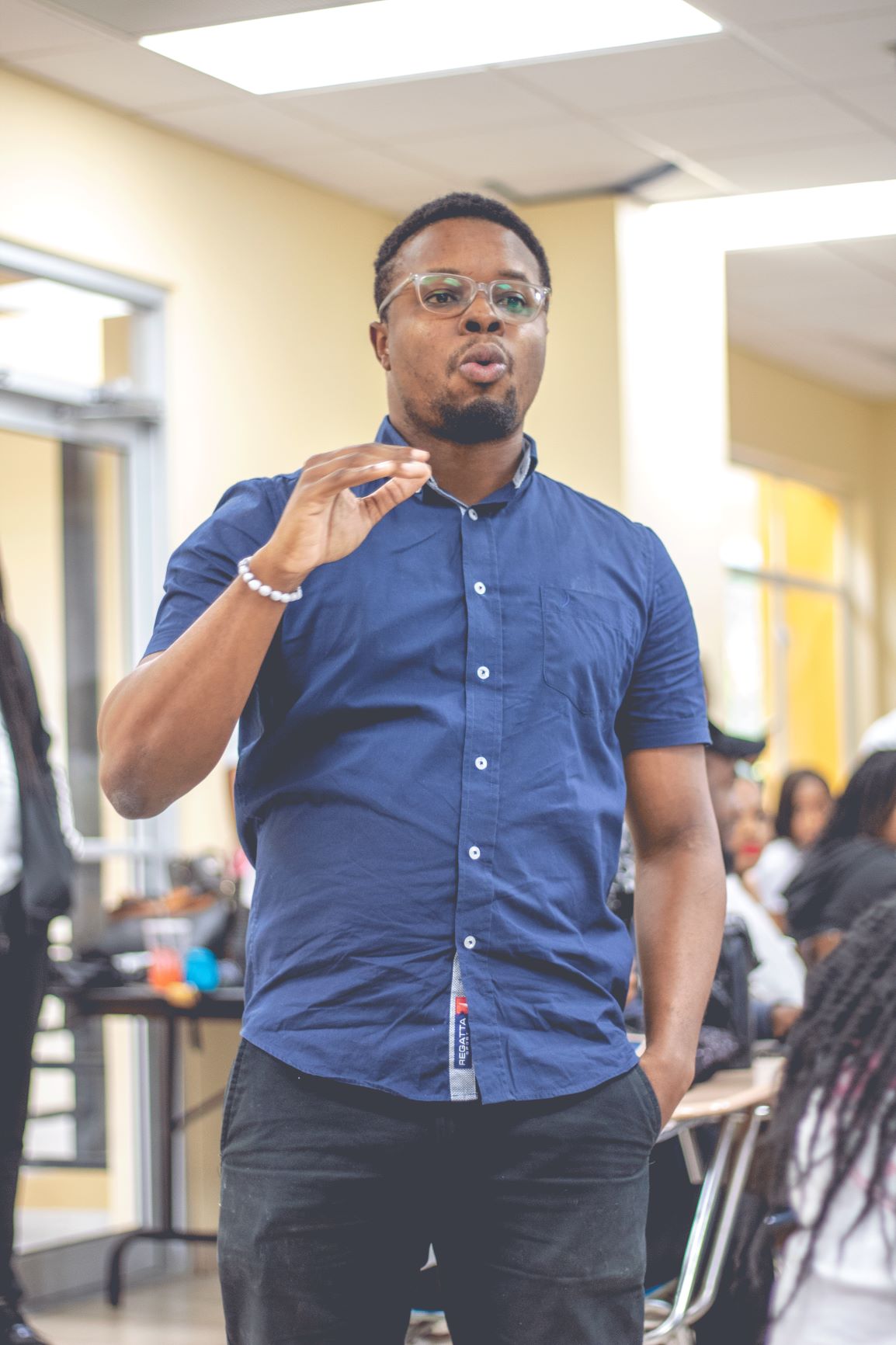 Founder and CEO of the University and College Ambassadors of Jamaica (UCA), Kristofferson Nunes, encourages members of the Future Marketers Association to focus on building their dreams during his presentation at a seminar held on the Papine campus of the University of Technology, Jamaica on January 17, 2019.
Photo by Tatyana Atkinson/UJS News

As the promotion of innovation and entrepreneurship among youths in Jamaica continues to expand, Grammy nominated artiste Protoje and CEO of UCA Jamaica Kristofferson Nunes encouraged members of the University of Technology’s Future Marketers Association (FMA) to embrace the role of entrepreneurs and focus on developing themselves and their respective talents.

On Thursday, January 17, 2019, the FMA held their first general meeting of the semester at the Shared Facilities building on the University of Technology, Jamaica’s Papine campus, inviting University and College Ambassadors (UCA) CEO and Founder, Kristofferson Nunes to speak on “The Evolution of Youth Marketing.” Reggae singer, songwriter and Grammy nominee, Protoje was also present, speaking under the theme “Celebrating a Decade: Staying Current in the Music Market”.

The meeting commenced with Nunes sharing his challenges in building his youth marketing company while enrolled at The University of the West Indies, Jamaica, completing his Bachelors Degree in Economics & Statistics.

He started the discussion with explaining how he founded UCA in his dorm room on a whim and pitched the idea to his friends and a number of investors. At first, he wasn’t sure what he was doing but he was aware about one of the keys to success: networking. It became an avid practice of his and he inspired his listeners to do the same. While sharing his experiences, he also mentioned that it is good to have a reliable support system that you can depend on.

“No man is an island, guys, you cannot be successful by yourself,” he advised. He also reminded the students of the importance of taking risks.

A student from the audience asked the UCA CEO about challenges he faced as a young marketer. He said he had no way of showcasing work from a two-year-old company so he reminded us to keep a strong portfolio that represents our abilities.

This 25-year-old entrepreneur also expressed where he sees himself in five years. He wishes to have UCA branches in all Caribbean countries. He has already started with Trinidad and intends to spread the brand further. 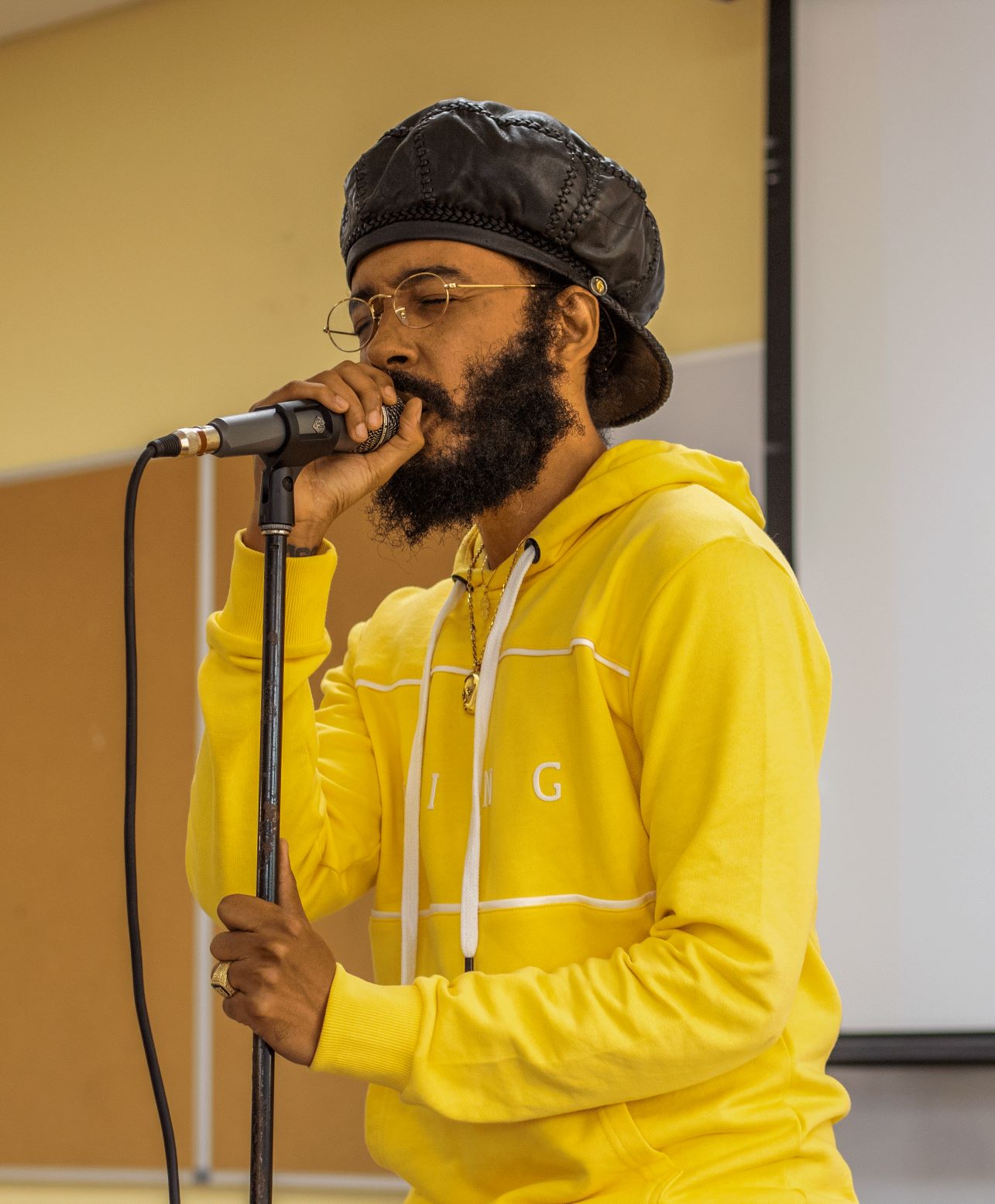 Grammy nominated Reggae artiste Protoje performs for members of the Future Marketing Association at a recent seminar held at the Papine campus of the University of Technology, Jamaica on January 17, 2019.
Photo by Tatyana Atkinson/UJS News

As one engaging speaker left the platform, another graced the spotlight with much anticipation. Protoje shared his experiences as an artiste from the moment he debuted unto the scene in April of 2009 through to 2018 and the help he received from his mother throughout his career.

In his presentation, Protoje explained how he managed to stay current in the music industry.

“Be dynamic, do different things to entertain and surprise them. Keep it dynamic so that people would say ‘this sounds different”. He stated.

He also addressed the fact that he didn’t really have an older reggae artiste that he looked up to who really promoted and motivated him so he wanted to change the reality of that culture. In light of that, he now stands behind young, upcoming artistes with like-minded visions, such as Koffee, Lila Ike, Sevana and others, via the In.Digg.Nation Collective record label. He also pointed out how important it is that we support these women because he did not like the way that women in the field were being treated, alluding that many had to do certain ‘favours’ to get recognition, studio time and more.

Protoje’s appearance came with a live show of old and new songs and a performance by upcoming artiste Lila Ike. The performances had the audience thrilled and wanting more. Free copies of his album ‘A Matter of Time’, were also issued. A Matter of Time, which was released in May 2018, received the nomination in the Best Reggae Album category for the 61st Grammy Awards ceremony happening in February, 2019.

The Future Marketers Association has an upcoming event called ‘X-Treme Futsal Triple Explosion’ that is scheduled to take place on January 24th at UTech Front Field.