According to a 2019 U-Report poll among Jamaicans youth aged 13 – 29, 53 per cent of responders indicated that they had considered suicide. Data also showed that 42 per cent of attempted suicides that were treated at hospitals were children. This data was presented at the webinar themed ‘Working Together to Prevent Suicide’ hosted by the Counselling Unit of the University of Technology, Jamaica (UTech Ja.), on World Suicide Prevention Day last Thursday, September 10.

Counsellor at the UTech Jamaica Western Campus, Susan Deegan-Crawford expressed her concern for students with suicide intent during her presentation on ‘Suicide Prevention in the Age of COVID-19’. Deegan-Crawford pointed out that “with universities being closed and limited social interaction” we should take heed of suicide warning-signs. These include, but are not limited to: discussing suicide, ruminating about death, being self-destructive, having feelings of hopelessness, acquiring weapons or harmful substances, and saying farewells.

Craig McNally, Senior Counsellor at the Papine campus of UTech Jamaica, also shared concerns for college-aged students during his presentation on ‘Dying to Die: Suicidal Ideation/Suicidal Intent’. Data on suicide mortality in Jamaica in 2018 showed that 46 per cent of the number of males who committed suicide were between the ages of 20 – 29.   In Jamaica, since 2015 and March 2019, 238 persons committed suicide. Of that, 212 or 89 percent were males. Notably, more women attempted suicide, while more men completed suicide. McNally mentions that men are more likely to use more strenuous measures such as guns or hanging compared to women, who will overdose or cut their wrists. 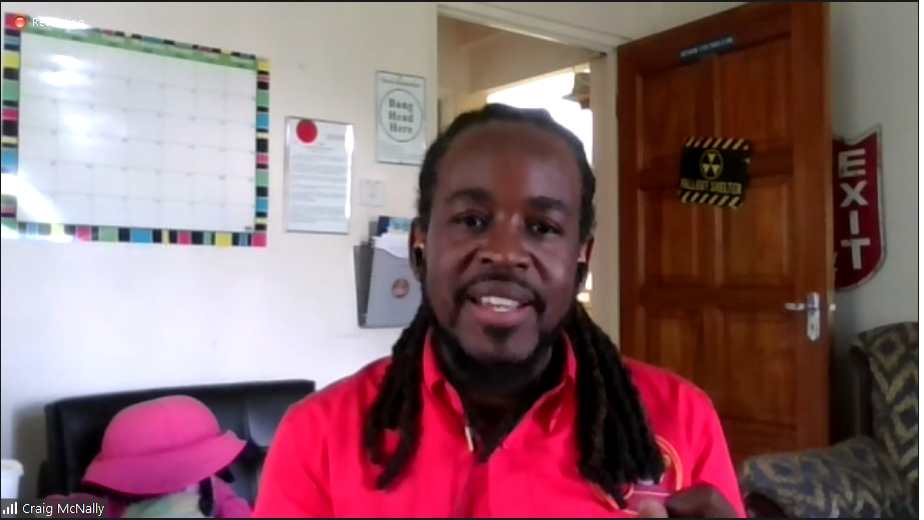 Craig McNally, Senior Counsellor at the University of Technology, Jamaica presents at the webinar themed ‘Working Together to Prevent Suicide’ hosted by the Counselling Unit of  UTech Jamaica on World Suicide Prevention Day, September 10, 2020. Screenshot captured by Brittany Jackson

One of the psychosocial reasons for high cases of male suicides is the norm for men to hide feelings of self-doubt and despair considering a ‘feminine’ trait or a sign of weakness based on how they were socialised. One way to address this McNally states is to advertise more images of males being vulnerable. “We should be more intentional about using more masculine images to associate with vulnerability or emotions/actions as this will help guys to know that it is okay to speak to someone.” Other notable factors that may contribute to youths committing suicide or suicide overall are death and loss, guilt and fear, broken love affair, sexual molestation, escape etc.

While both presenters urged participants to be cognizant of suicide warning signs, they also highlighted some suicide prevention tips. These include: being kind to one another, listening to understand, being empathetic to a person contemplating suicide and staying in touch with those who have mental difficulties.

Another important approach to preventing suicide and promoting mental health is encouraging healthy lifestyle choices. This means staying aware of your emotions and feelings, identifying coping mechanisms, doing regular exercise, nourishing your body, getting adequate sleep and promoting healthy relationships – all of which influences emotional wellbeing.

Additionally, McNally urges persons to be empathetic towards those individuals “who are going through circumstances; facing issues that perhaps in your [our] opinion is infantile in comparison to what other persons are going through.” Deegan-Crawford endorse this view as she states that suicide is a highly complex issue that requires coordination and collaboration among the people and sectors of society; and while no one has all the answers to stop another tragedy, “sharing a simple smile can help someone take the first step towards life.”

“It’s not the situation in our lives that causes distress, but rather our interpretations of those situations”. This quote by Aaron T. Beck resonated with many of the attendees of the webinar. This is in spite of the concerns about increasing mental health problems of Jamaicans amid the COVID-19 pandemic, which clinicians and public health professionals fear can lead to an increase in the number of suicides locally.

If you are contemplating suicide or know of persons who have suicidal intents or have made suicidal attempts, please make contact as follows: