Samuels was speaking at the distinguished lecture organised by the Organization of American States (OAS) in celebration of the Fourth Annual Inter-American Week for People of African Descent in the Americas on March 25, 2021, under the theme “Ending slavery’s legacy of racism: the imperative for strengthening justice and resilience in Afro-descendant communities in the Americas in the face of COVID-19″.

Samuels notes that self-hate and loss of self-esteem is an impact of the slavery legacy that is affecting us as black people in Jamaica, other Caribbean countries and the United States. “Skin bleaching, black-on-black violence and the sickness of colourism which treats black as unattractive and the lighter skin as more socially acceptable is commonplace.”

“Colourism is a legacy of slavery pervasive in Jamaica, a country that chooses to be in denial of this phenomenon. The paradox is that this mental slavery is alive in a country with a majority of black population,” he continued. 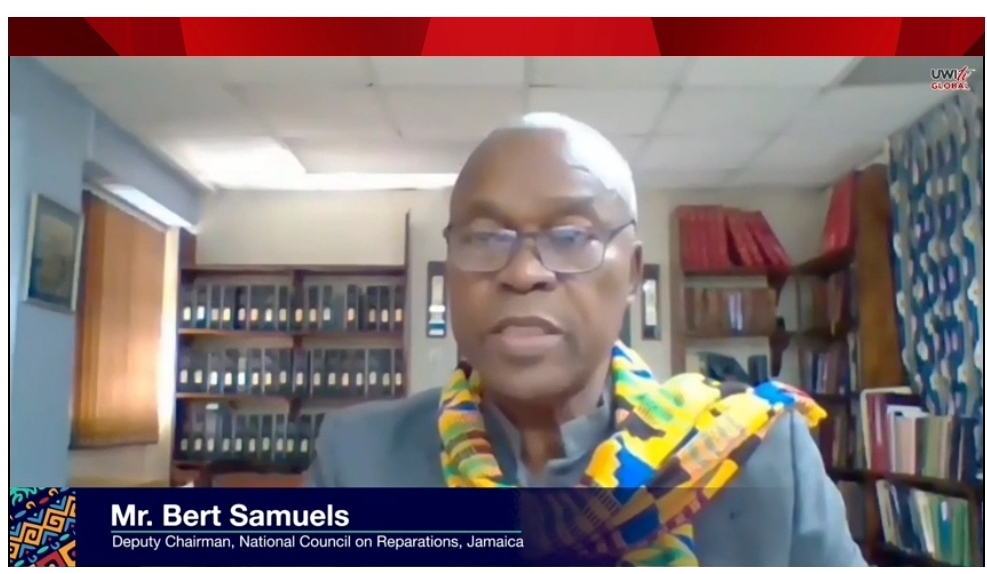 Bert Samuels, Deputy Chairman of Jamaica’s National Council on Reparation speaking at a distinguished lecture, in celebration of the Fourth Annual Inter-American Week for People of African Descent in the Americas on March 25, 2021,

The mistreatment of Rastafarians by police and other government officials is another legacy of slavery which is pervasive in Jamaica. Samuel gave a number of examples. These included the 2003 trimming of a Rastafarian after being held in prison for ganja by prison officials. As recently as 2020, staff of a public hospital shaved the beard of an elderly Rastafarian. “The experience of Rastafari is a fine example of another paradox. They are not respected at home but as a cultural group, are highly responsible for the highly rated, ‘Brand Jamaica’.” Samuels explained.

Samuels stated that racism is another legacy of slavery pervasive in Jamaica which also affects the children and the education system. In a court rule in 2019, between a public high school versus a student wearing locks, the principal of said high school discriminated the student by saying derogative words about the child’s hair and was free to deny the child’s right to an education.

Poverty is another legacy of slavery which was mentioned by both Samuels and The Most Honourable P.J. Patterson during the distinguished lecture. Patterson explained that, “poverty has exposed us to inferior education, poor health, lack of public access, poor criminal justice system and police violence.” Due to poverty, mortality rates have increased today in Jamaica especially now in the midst of the COVID-19 pandemic.

Patterson also made note of the police brutality towards a black innocent man, George Floyd in the United States.  “George Floyd and other acts have put on full display, the reality and horrors of racism,” Patterson explained.

Samuels notes that “justice for past enslaved people of the Americas cannot come in the absence of reparation.” As such Minister Olivia Grange, Minister of Culture, Gender, Entertainment and Sports hopes that critical recommendations will be made to the Organization of American States and the Inter-American committee to cooperate with countries like Jamaica to promote reparation for the injustices.

With reference to the words of John Berkin, Samuels ended with, “if justice don’t come through us, it won’t come at all.”