In spite of the COVID-19 pandemic that has ravished Jamaica and the world,  one programme – TVJ’s School’s Challenge Quiz – has stood firm and has found a way to survive during these devastating times. This has allowed the  Wolmer’s High School for Boys to claw and fight their way to their first TVJ School’s Challenge Quiz final in 38 years. The maroon and gold school – which is the oldest high school in Jamaica – has won five titles and is looking for number six when they take on defending champions Ardenne High School on April 8 live at 8:30 p.m. on Television Jamaica. 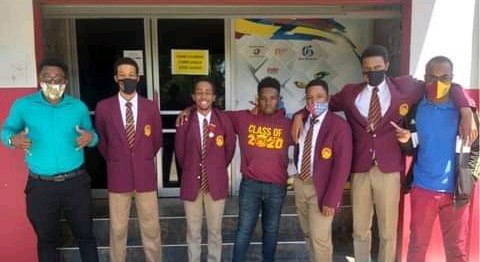 Head coach of the team Kevaughn Mowatt, who is a past quiz player of the school says his team was determined to right the wrong of the past two seasons especially the school’s most disappointing defeat at the hand of newcomers Maggoty High School  in 2019. “The season started with us determined to go far. Part of it was fueled by the major disappointment of 2019. We had two seasoned players that we recognized as being very capable players and the intention was to find two young gems to compliment them”. Mowatt was alluding to Chevaughn Falkner and Raheem Spencer who are in 3rd and 5th form respectively. The two returning players are captain Zaire Pinto and Jerome Brooks who are both in Grade 13 and competing in their final season.

Due to the pandemic, several schools withdrew from the competition and this forced TVJ to find a way to make up for the matches that would have been lost. Therefore a best of three format was implemented for both the quarterfinals and semifinals, where the first team to win two out of the three matches advanced to the next round.  Although admitting that his team had to adjust mentally to the new format, Mowatt was confident that they could be successful regardless of the format, stating “when the draw was released and we came to the realization of the best of three format, we were upbeat as coaches as the novelty of it all, posed a challenge. Even though we realized that most likely our quarterfinal opponent would be preseason favourites St. Jago High, we were not daunted.”

St. Jago had gone to the last three finals and had retained three players from last year’s team. Wolmer’s defeated St. Jago in the first best of 3 encounters 43-31 but the Monk Street-based team turned the table on Wolmer’s and won the second encounter 40-25 before Wolmer’s regained their form and won the decider 36-23 to book their place in the semifinals against Campion College which they swept two matches to zero to qualify for the finals.

Should Be a Pulsating Final

He admits that the two teams play different styles but believe that they are equally effective and believes that the team that holds their composure will come out with the title. “We try to incorporate swagger and confidence in our play which has been missing from our programme for the last decade or so. Ardenne matches up well with us although they play more conservatively which allows them to take fewer risks than their opponents and capitalize on the errors of the other team. In my opinion, the final can go either way and it will most likely be decided by the team that holds their mettle.”