“When the school call me, me never go because it no make no sense cause me nuh have no tablet and no internet fi the pickney dem use, so when the guidance counsellor start carry the work come, it make me feel good because me know the pickney dem ago learn now cause me did done give up pan dem.” These are the words of a grateful parent from the adjoining southern Clarendon communities of Milk River/Farquhar, which highlight the initiative of Nardia Blake-Chamberlain, the guidance counsellor of Rest Primary and Infant School.

Due to Jamaica’s current COVID-19 protocols, schools have had to take a virtual approach to teaching, with the majority of classes being delivered online. However, Blake-Chamberlain recognised that several of her students were going to be left behind academically, because they either had no devices or internet access. This led Blake-Chamberlain to create the “No student gets left behind” initiative.

In order to confront the challenge, Blake-Chamberlain got in contact with the student body and surveyed all the students to find out who had devices and internet access and who didn’t. With this information, she came up with a plan of getting the materials to all students who didn’t have the means to get the work online.

The plan she devised was that on Tuesdays and Thursdays she would collect one week’s worth of work from each grade teacher to take to the students. She divided the students into two groups based on their location for the two days, to have an easier commute. Each grade teacher prints their work, which is dropped off by Blake-Chamberlain to the homes of each student in need. The students complete the assignment, which is collected the following week when she drops off the new materials. The work that was done by the students is marked and returned the following week. 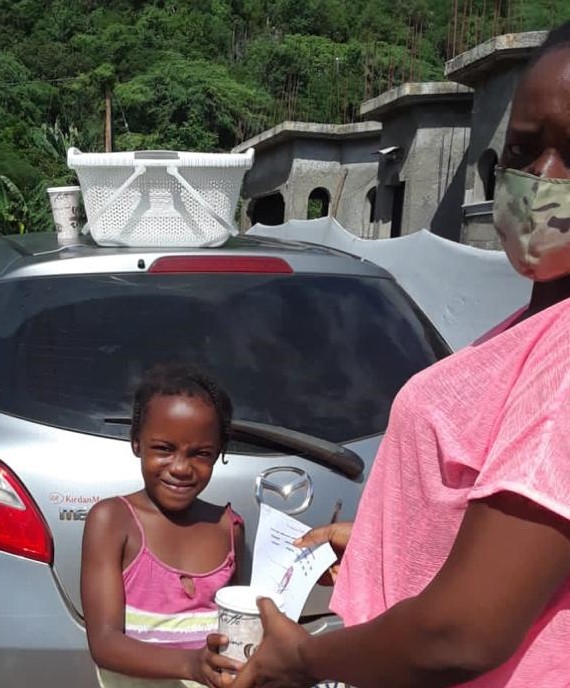 Nardia Blake-Chamberlain, guidance counsellor of Rest Primary and Infant School hands a student her worksheet and also her meal for the day in southern Clarendon. Photograph by Mike Wright

“I decided to take on this project because I know these students personally, many have potential but would be left behind because of financial constraints. Most of these students cannot afford the tablet nor the Wi-Fi hence I knew I had to do something just to ensure that my children can have access to the materials necessary” Blake-Chamberlain explained.  She also added that the school decided to give the students a cooked meal on those days when they are given the worksheets to ensure that they have a hot meal at least once per week.

The parents in the communities of Milk River and Farquhar explained that they have poor cellular signal and activating data on their phones for the students would be a waste of money because they would still not be able to access the online platforms. Hence their praise for the school and Blake-Chamberlain for the initiative.

Blake-Chamberlain has confirmed that once the students are at home, she would make it her weekly point of duty, to ensure that all students have gotten their worksheets along with feedback. She aims to ensure that no student gets left behind, no matter how long the stay at home order is in effect.