The contribution of women to Jamaica’s cannabis industry was the focus of the most recent forum organised by the National Council on Drug Abuse and hosted by the University of Technology Jamaica (UTech Jamaica), on March 30. Entitled ‘Women in Ganja’ to mark  Women’s History Month the forum centered on: the history of women in ganja, the dispelling of prevailing stigma, ganja licensing, and improving ganja literacy.

Women’s contributions to the cannabis industry has been ongoing for many years. From the 19th century, women have used the drug for different medicinal purposes. Women have used the herb as a sedative for menstrual pain and also to battle coughs and various  illnesses.

According to Annette Henry, Attorney at Law, Licensing and Regulation, women are being embraced in the industry and are encouraged to continue to occupy positions in the ever growing industry that has blossomed during the pandemic to being one of the fastest growing employment industries. This is despite myths that it is a male dominated industry. Moderator Saudicka Diaram described the influx of women in the ganja industry as “breaking the glass ceiling”, destroying wrong perceptions concerning women and cannabis. 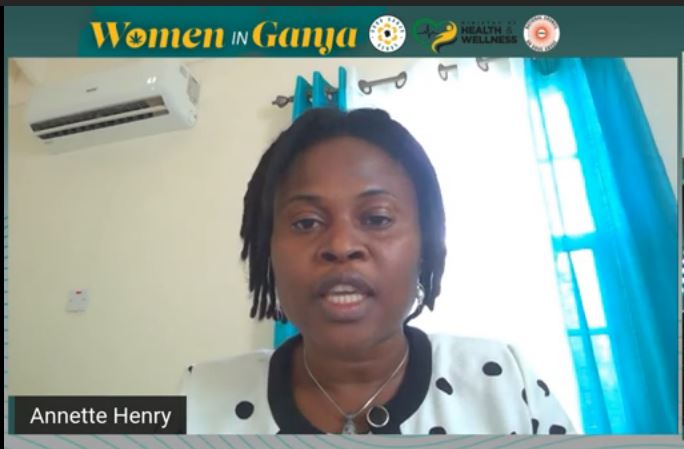 Annette Henry, Attorney at Law, Licensing and Regulation speaks during the online ‘Women in Ganja’ forum on March 30, 2021. Screenshot captured from https://www.youtube.com/watch?v=XKA5OBUgTQ0&t=1802s

Felicia Bailey, Director of Research Development and Communications at the Cannabis Licensing Authority, stated that 52% of the current workers in the industry are females, who work in every aspect, from research to cultivation and advocacy. Women are said to have a natural touch for caregiving and are mostly hired as plant nurturers. With the challenge of obtaining bank loans, women interested in entering the industry were encouraged to pool resources in order to start and maintain a business.

During the forum, it was noted that women are occupying many roles as it relates to the science, cultivating, and advocacy of the herb. These include: Faith Graham acting Chief Executive Officer of the Cannabis Licensing Authority (CLA) that is responsible for regulating the legal industry for scientific, research and therapeutic purposes. Cindy Lightbourne, former chairman of the CLA, and Joan Webley who worked as an advocate for cannabis.

Annette Henry spoke with passion about the importance of the drug’s medicinal and economic value. “Because we will have to move from what we think of the rubbing of the hand middle, to appreciating that there are tinctures, sublingual’s and many things that we can get from ganja” Henry stated. She believes that focus should be put on the nutraceutical industry and laws concerning the delivery of ganja be revisited, also that the research conducted be open and fluid in doing so, “we’re going to find the known in the unknown.”

With ganja’s many uses now being publicized Scheril Murray Powell, Agriculture Cannabis and Dietary Supplement Attorney, believes ganja can be taken “from the boys in the street” mentality and appreciated for its many uses.