Both teams entered the match seeking to create history. Wolmer’s were seeking their sixth overall title and their first in 38 years, which would make it the longest drought between victories in the competition’s history. Ardenne on the other hand, was seeking their eighth title and second in as many years which would make them the first team to achieve this feat since Calabar High School in 2005.

Ardenne Quick Out the Blocks

The defending champions appeared to be better mentally prepared for the match as they took a 5-3 lead at the end of the first section. Ardenne navigated their questions better and seemed confident in their approach and the championship mettle showed in the first two sections of the match. Ardenne also dominated the speed section, outscoring the all-boys school 17-13 to take a 22-16 lead going into the final section. This wasn’t the first time that Wolmer’s Boys faced a deficit going into the final buzzer section this season, as they trailed twice to St. Jago High School in the quarterfinals and once to Campion College in the semifinals and won two of those three games. Based on this record, no one expected the Maroon and Gold school to lay down and accept defeat. 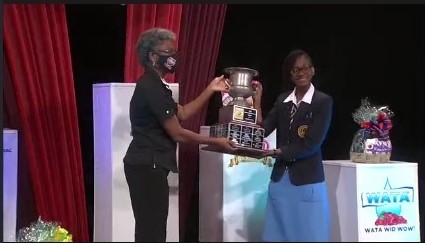 The buzzer section started with Wolmer’s seeming to have found inspiration, and the six point lead that Ardenne had entering the buzzer section, quickly evaporated. Wolmer’s attacked the first five questions of the section and reversed the deficit to open a four point lead at 26-22 without a response from the defending champions.

Ardenne seemed rattled, as their first answer resulted in an incorrect response to the music question, which put them further behind. At this point, it looked as if the Maroon and Gold boys had all the momentum and would push on. However, Ardenne managed to regain their composure and with some help from their opponents, they quickly closed the gap and eventually leveled the score at 24-24 with 1:43s left on the clock and then took the lead with 1:25s left at 26-24.

The physics question that followed would be the turning point of the match. The question read “Specifically using conventional symbols, what is the formula used for calculating the height or distance traveled by a body falling freely rest under gravity?” Ardenne’s answer: s=ut + ½ at^2 was not initially accepted.

Wolmer’s had pulled away and with 10 seconds remaining had a 28-24 but in trying to kill the clock Wolmer’s went for the Bible Knowledge question and lost two valuable points which would have taken the match to sudden death. During a commercial break, the judge’s reviewed the physics question and Ardenne was awarded the 2 points they initially lost and the  two points they should have received, giving them a 28-26 victory,  which crowned them the 2021 School’s Challenge Quiz champion.

After the match, the captain of Ardenne High School, Kelsi Grant, gave a heartwarming speech and gave a few words of encouragement for all the participants and the country at large during this global pandemic. “The clear message today is, no matter how challenging the adversity, we remain resolute and achieve greatness if we refuse to give up.”