The virtual debate was hosted by UTech’s Faculty of Education and Liberal Studies in collaboration with the University of Technology, Jamaica Debating and Public Speaking Society (UDPSS), with the motion: “This House believes that those who witness domestic violence should report it without regard to personal consequences”.

Do Not Suffer in Silence

Sadiki Connickie of the government side, first argued that men and women should not suffer in silence and it is our responsibility to take care of each other. He further quoted Martin Luther King to defend his stance. “Martin Luther King once seh, every man haffi decide whether or not him waa fi live in the light of creative altruism or live in the darkness of selfishness, you decide.”

Romario Rose, the second speaker of the Mico University College team argued that, as a Christian country we should do the Christian-like thing and report domestic violence when seen. He further argued that “the informa fi dead mentality must change in the culture of our society.”

Joelle Brown, UTech, Jamaica’s second speaker argued that when parents discipline a child and it is reported, it is undermining the parents’ ability to discipline their child.  Brown continued to say that reporting a domestic abuse may lead to death or making you the enemy so it is best to mind our own business. “If a nuh my business, why mi a go face the consequences …sometimes we just haffi play our part an’ mind wi own business.”

The third speaker on the government team, Khalaycia Irshad, argued that persons do not have to worry about other persons knowing that they were the one who reported the abuse. “You can stay anonymous if you waa report the domestic violence dispute. Crime stop a weh u fi call. The number go, 311.” Irshad continued to say that the Evidence Act in Jamaica allows persons to become anonymous if they are a witness to a crime.

Tomlinson rebutted that the Jamaican government is broke therefore they cannot do witness protection, so safety is not guaranteed. 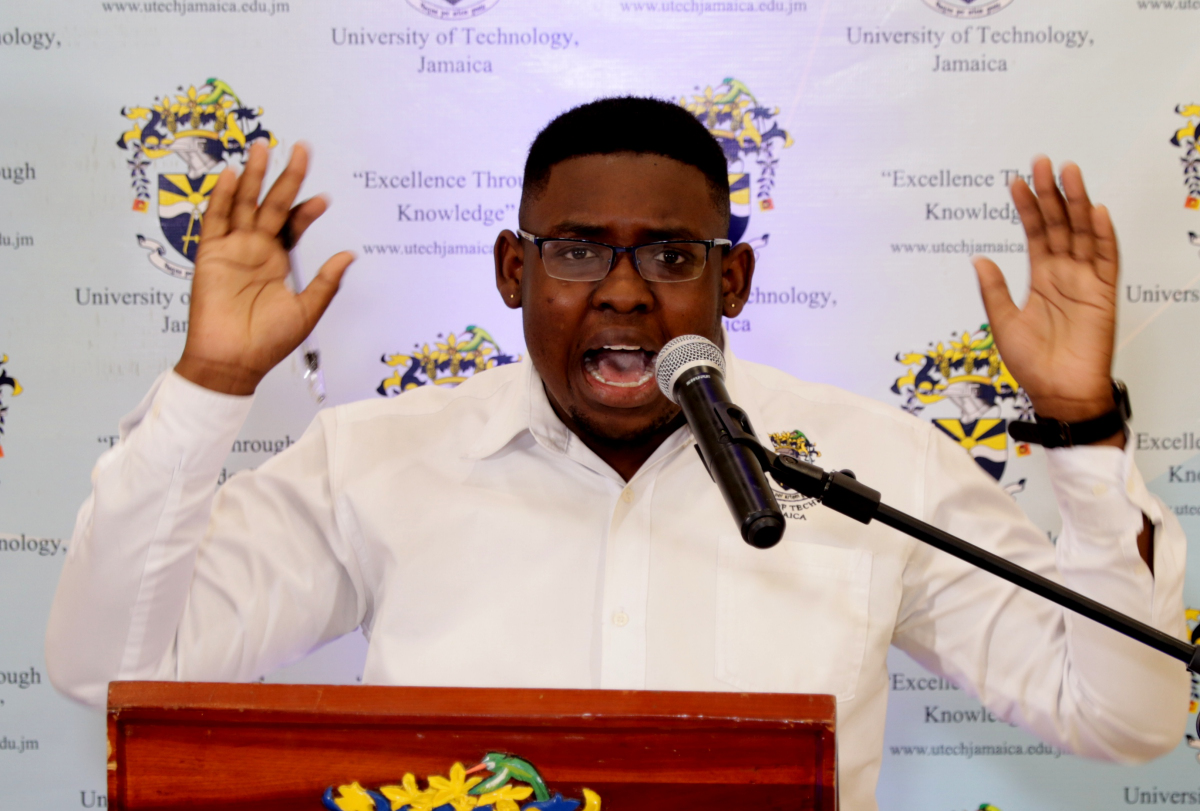 Cleveland Tomlinson outgoing President for the UDPSS speaks during the third annual patois debate
held on April 22, 2021 at the University of Technology, Jamaica. Tomlinson was named as best speaker of the debate. Photo by Demetrious Robe.

UTech, Jamaica’s third speaker, Amori Jarrett, argued that crime stop cannot pay for a person’s life therefore persons should just mind their business. Jarrett continued to note that talking to the police is sometimes not the best decision.

After arguments were made, they were scrutinised by debate professionals who served as adjudicators for the match. The panel of adjudicators included: Janelle Haye-Nelson who was the Chief Adjudicator from the Northern Caribbean University (NCU), Germaine Barrett from UTech, Jamaica and Carlyn Thompson from The Mico University College. Subsequent to deliberation and remarks from the adjudicators, it was announced that from both teams respectively, Cleveland Tomlinson and Khalaycia Irshad asserted the best arguments. Mr. Tomlinson emerged as the best speaker of the match.