Following the emergence of the COVID-19 pandemic in Jamaica, resident students of the University of Technology, Jamaica (UTech, Ja.) have been adjusting to the changes and challenges which have resulted from the accompanying guidelines and restrictions. These challenges include obtaining food due to the closure of most food establishments on campus, safety concerns and adapting to daily routines guided by pandemic restrictions. 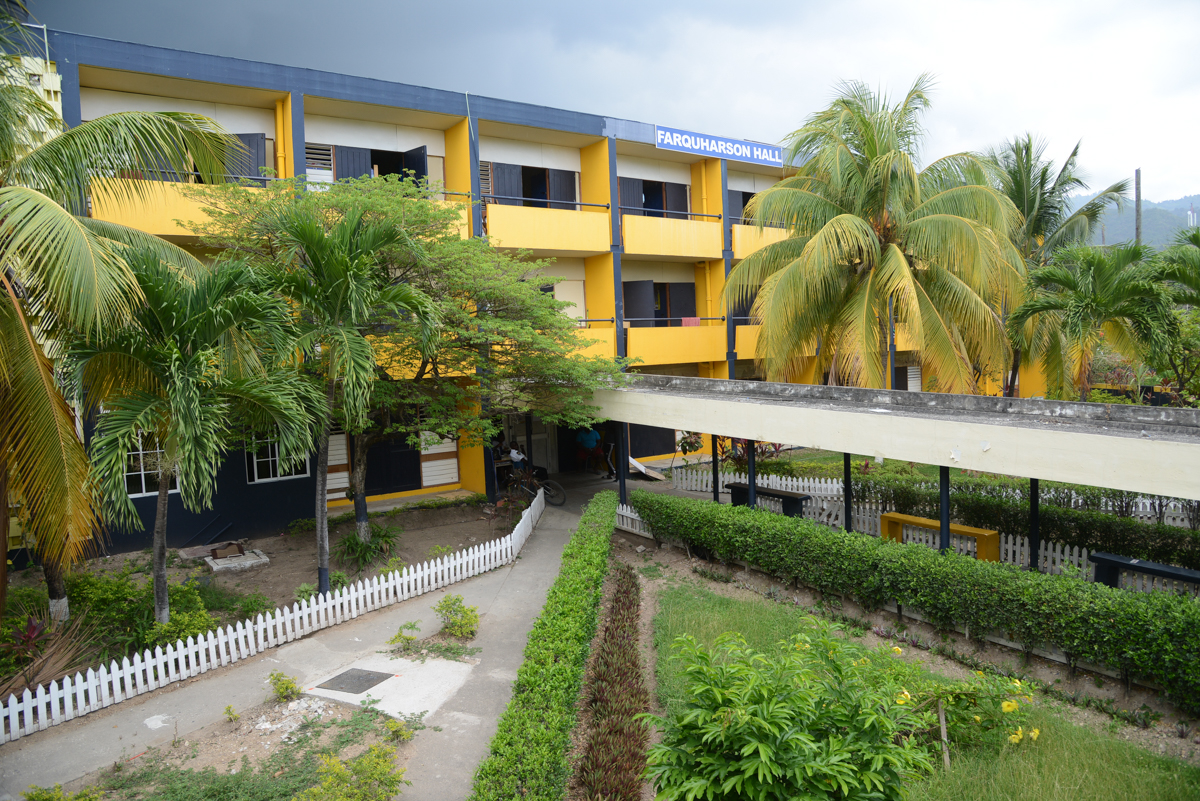 File photo of Farquharson Hall of the University of Technology, Jamaica Papine campus. Photo by Andrew P. Smith for UJS

Jenelle Charles is a second-year student who resides on Hall E and has lived on-campus since her first year. Her days are taken up with resident activities and finding the best location to attend online classes, which she maintains has always posed a challenge.  In regards to obtaining food supplies, Charles described navigating the lockdowns as being a “bit hectic” saying, “…we would get a notice like the week that probably would’ve been lockdown for the weekend and we’d have to scramble to find cash or to find transportation or to find time in our schedules…to get groceries…to last us during the lockdown.”

This sentiment is shared by the Resident Student Representative of the UTech, Ja. Students’ Union, Santino Mitchell, a third-year student who’s been living at Hall F since his first year. Mitchell stated that one of the major concerns reported by students was the island-wide curfews on establishments, which have affected them more when buying items at night. He explained that aside from the time constraints, students are presented with safety concerns when venturing off-campus in the day stating, “…at certain points in time Papine isn’t a safe place…living on dorm right across the road…you can see outside of Papine sometimes you see or you hear the gunshots.”

In his capacity as a student representative, Mitchell stated that another major concern was the delivery cost associated with ordering food. He noted that several of the newer students would not be privy to the on-campus amenities in previous years and adjusted without complaints. Consequently, Mitchell has not heard many gripes and surmises that students are utilizing the available on-campus establishments.

Dampening of the Campus Experience

The consensus of the resident students is that Covid has dampened the spirit of the university’s campus, with Jordan Adams, a fourth-year student, of the Donald Farquharson hall, commenting that “things have become less fun and more difficult.” Like Mitchell, his pre-covid experience in the dorm allowed him to indulge in several of the campus amenities. Adams believes that Covid has affected his ability to obtain food supplies saying, “…it has made it more difficult because now…I’m going on the road more often than usual.”

Likewise, Mitchell noted that his prior experience on the hall was ‘good,’ as they would go to classes, spend time in the common areas and cook with their housemates. When compared to the current situation, he noted that they no longer have roommates and most of their days are spent in their rooms in online classes while observing dorm restrictions regarding gatherings. In his recounting of pre-covid events, he said, “There were a lot of choices…You didn’t have to cook every day…If you wanted something, you could get up from your room and get it…there wasn’t much ordering as there is now.” 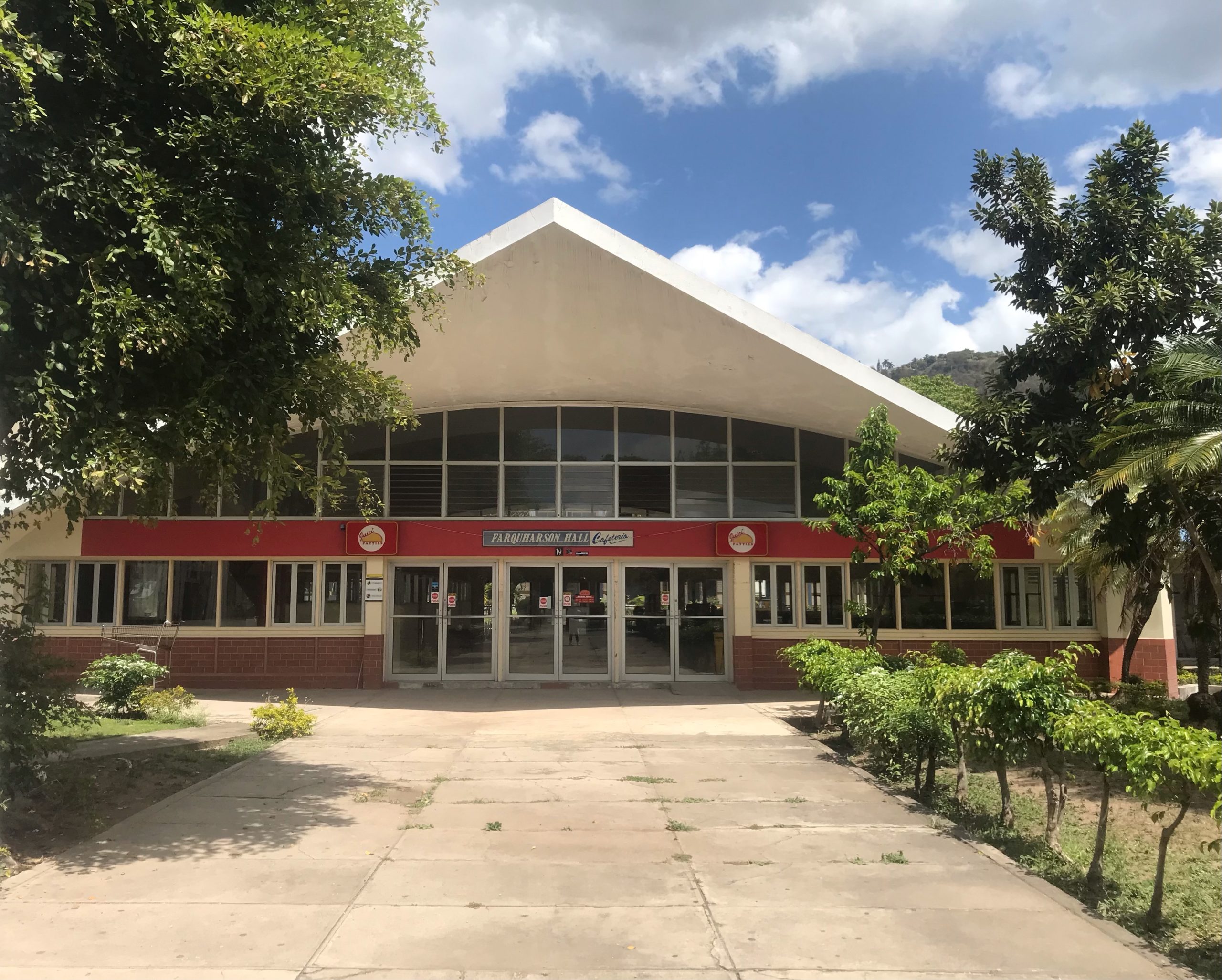 The cafeteria that was operated by Juici Patties has been locked during the COVID-19 pandemic. Photo by Boginene Jones

Contrastingly, Gyles explained that they “…just have to work with what is there or find other sources or other places to source food from.” Gyles herself has not been significantly inconvenienced by the limited establishments, having always frequented the supermarket. She agrees that these minor inconveniences have resulted in frequent trips off-campus. Charles also noted that the decrease in lockdowns since the start of her second year has made shopping easier. However, she still stocks up on items to decrease the number of trips made. Charles further explained that, with limited options, students like herself easily tire of the two fast food options available to them, namely Burger King and Submerge.

Many students recall fond memories of their pre-Covid residency while others can only envision these experiences. Mickaila Huie, a first-year student at Hall A, began living in the dorm, only months ago. She recalled stories from seniors describing the campus pre-COVID, naming the establishments and normal activities that took place there. She doesn’t feel that the closure of on-campus food establishments have made it more difficult for her stating, “…I’m not the type of person to feed on fast food…[yes] it would be nice to have the…restaurants here to have [an] option if it wasn’t here at all I don’t think it would affect me.”

Students have expressed varying views on what they believe the university can do to better their situation. Gyles doesn’t believe that the university can do anything until some normalcy is returned to the campus. Her beliefs are shared by Adams who explained, “…if a business doesn’t see it fit to be open because they’re not getting enough sales…then it doesn’t make sense for that business to be open.” However, he suggested that the university could persuade the businesses to re-open by offering to cover some of their expenditure but acknowledged that this wouldn’t be fiscally responsible. On the other hand, Huie believes that the university could find ways to help resident students be more comfortable. Likewise, Mitchell suggests partnering with delivery services and food establishments referencing Domino’s Uni BOGO deal for students, “…they can partner with them and have those little promotions because we are one of the major stakeholders.”

In justifying businesses’ position, Mitchell agrees that their closure is something many couldn’t have avoided. “It’s a situation where anybody who comes in will have to be willing to lose…so you can’t really blame them…” He went on to explain that “For the few that are on campus at the moment…people visit them regularly and they do appreciate us, resident students, because from time to time we get them as sponsors for events.”