“Simply elegant” is the way Regina Johnson, a final year Bachelor of Arts in Apparel Design, Production and Management (ADPM) student at the University of Technology, Jamaica (UTech, Ja.) describes her designs.

Creativity has presented itself in several facets of her life as she is not only highly regarded for her singing and dancing but her fashion designing abilities. Johnson, who has had an interest in fashion since a very early age stated, “I was probably 4 or 5 and I used to cut balloons to make swimsuits for my dolls, so I used to cut them up to make the top or the skirt and then cut up socks and stuff to make bathrobes for my dolls…obviously, they weren’t great but they were good for a 5-year-old.” As a result, when it came time to select CXC subjects, Johnson and those around her weren’t surprised by her art-related choices. 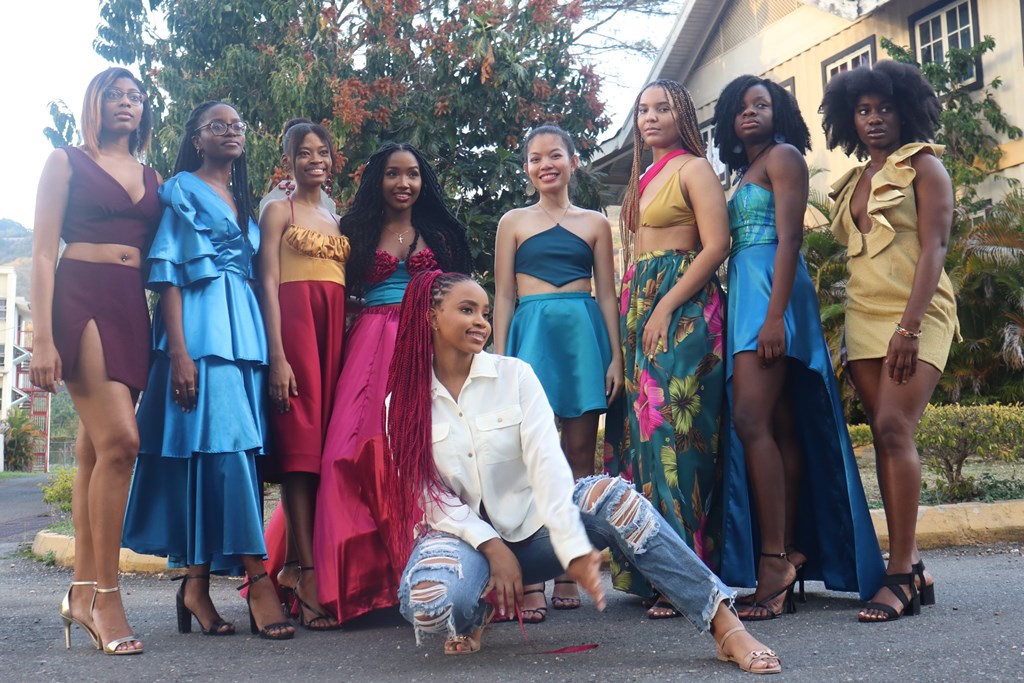 Designer Regina Johnson (centre) poses with models showcasing her designs at the Spring Into Fashion ‘22 Showcase held at the University of Technology, Jamaica in April 2022. Photo by Justine Bolton

Describing her personal style as being more comfortable, often consisting of sweat pants or jeans and a simple shirt. Johnson attributes some of her stylistic choices to the local landscape, “I would love to dress differently but Jamaica’s society is more conservative, it’s already bad enough dressing [regularly] as a curvy woman in Jamaica, I don’t really want the attention on my body as much.” Some of those sentiments influenced the designs in her debut collection ‘Guarded Freedom’ at the ‘Spring Into Fashion’ showcasing in April 2022. Johnson’s pieces were described as vibrant and simply elegant, designed to bring out the confidence in women. Inspired last summer, Johnson like many others identified her personal struggles with COVID weight gain, “I was so used to being the fit one or exercising consistently….and like a lot of [people] my body changed during quarantine and I was no longer comfortable with what I would wear.” During this time she found that the clothes she made for herself, gave her a sense of freedom, comfort, confidence and a sense of security. All of which she hoped her collection would reflect and provide its wearers. Johnson recognizing her collection’s allure described it by saying, “It’s something you can’t miss.”

Johnson is looking towards a bright future and hopes to be somewhat interwoven into the fabric of the local fashion industry in the near future. Until she gets there she continues to hone her skills through various means stating, “I’m always learning something I’m always on Instagram reels, YouTube or even TikTok anywhere I can learn… I have several things saved so that when I’m ready to learn I can go and attempt…I’ll even ask someone.”

Lastly, she lamented that with the increasing number of fashion influencers there seems to be a space and a general acceptance of the growth and sustainability of the local fashion industry. She also acknowledged that there is still room to grow, as it relates to pushing the boundaries, and that budding fashion designers provide a glimmer of hope for the industry’s continuance. Her message to young designers is simple, Just do it… it’s not as simple as saying it but with the emergence of social media, your impact can be seen and felt internationally.