“My life, even with its challenges, became sort of a miracle, a blessing from God and I could not imagine it any other way. I am blessed and I have joy. I never gave up. I am happy. I stayed in it for the long play.” These are the words of “Ms. Pat”, Patricia Dorothy Chin, O.D., music pioneer and co-founder of VP Records, who gave the Annual Bob Marley Lecture, hosted by University of the West Indies’ Institute of Caribbean Studies last Friday. This year’s online event focused on the trailblazer’s reggae music journey through the eras of mento, ska, rocksteady and dancehall. 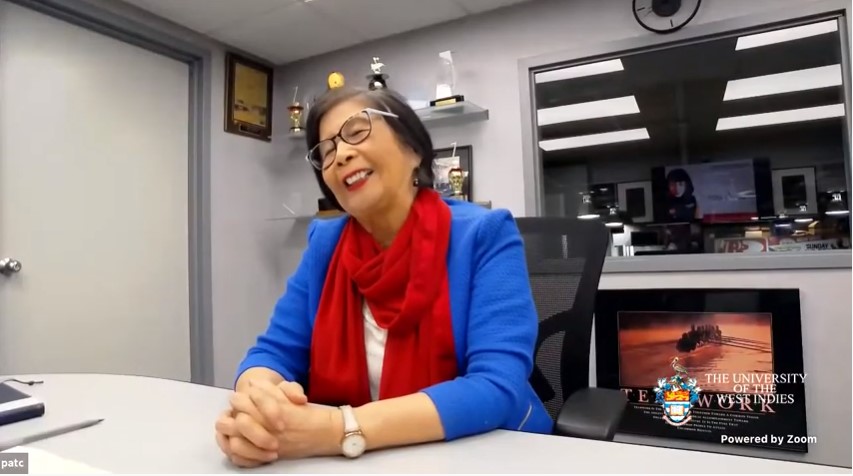 A Journey of Love

Ms. Pat commenced the lecture of her 60-year journey with a quote from Maya Angelou: “it’s not about what you do but the love for what you do.” She noted that this quote has been a guiding philosophy through a life filled with equal shares of joy and sorrow.

Her journey began with the love which she and her husband, Vincent Chin, shared for music records. However, the media organizations at that time were not fond of playing local music. Consequently, her husband would buy jukebox records and stock them at the door. “One day, while staring at the growing pile of records, I had a bright idea,” Ms. Pat exclaimed. “I said to Vincent, if Mr. Asa doesn’t need these old records, why don’t we buy them from him and sell directly to the public?” Her husband quickly caught on to the vision and they rented half of a shop space from the father of one of Vincent’s friends. Thus, in 1959, Randy’s Records was born in Downtown, Kingston.

In 1961, they secured a more vibrant space even though it was extremely small. In fact, Ms. Pat noted that if three people came in at a time, the shop was full. Notwithstanding the space, business skyrocketed and drew audiences, artistes, musicians and producers from all over the country. Vincent and Ms. Pat were then able to secure a loan and buy the entire building from the owner. Their entrepreneurial spirit and passion for success led them to buy the building next door and constructed Jamaica’s first all-inclusive recording and mastery studio: Studio 17.

Studio 17 became a global magnet and led to Jamaican music being played on local radio stations for the very first time. Ms. Pat smiled nostalgically as she recalled how Bob Marley ventured into Studio 17 as a “regular person” but recorded ‘Lively Up Yourself’ and ‘Trench Town Rock’ then became a big hit.

Ms. Pat, like many who have charted the path to success, endured her share of struggles. She recounted that a primary challenge was being a “woman doing a man’s job.” Many persons doubted her knowledge, expertise and abilities simply because she is a woman. She went on to recall how one day, a customer on the phone asked to speak with a male because she did not seem to know what she was doing. Furthermore, prior to business taking off, they experienced financial constraints. So austere was the situation that they could only afford to buy one record at a time. Ms. Pat stated that her Chinese orient was another source of discomfort to many persons as well as the struggle of many people accepting reggae music. However, an upsurge in violence was the biggest obstacle which they faced.

In 1970, Vincent and Ms. Pat moved to Queens, New York out of fear for their lives and safety. Here, they opened a similar store to the one they had in Jamaica but disaster soon struck again when their main supplier went bankrupt. Not only that, but they could not import their records from Jamaica since the Government of Jamaica banned exports.

“A few years later, we took on the burden of taking a mortgage and buying a building to start our new business,” said Ms. Pat. In 1979, VP Records came into being and to date, is the largest independent label and distributor of Caribbean music.

Through all the sorrows, including her husband’s death in 2003, her hard work did not go unnoticed and in 2006, Ms. Pat was conferred upon with the Order of Distinction for her contribution to the development of Jamaican music. In 2015, she received the Lifetime Achievement Award from the American Association of Independent Music.